Some parents scare their children when the little ones see a police officer on the street. In the eyes of some children, a figure of authority has turned into a daytime bogeyman. For a toddler in North Carolina, however, that’s far from the case.

Two-year-old Brennan always has something to smile about on the way to her daycare center. Each morning when she rides inside her mommy’s car, she’s greeted by a kind-hearted police officer.

Brennan’s mom, Emily Barrowclough, told a local news source, “Our interactions last maybe eight seconds. Even with that minute time, he has imprinted on my daughter that police officers are trustworthy, kind and want to keep us safe.”

Just recently, Brennan received a surprise from officer DelDuca. It’s a teddy bear he handed to the little girl while she was seating on the passenger seat. The toddler was so surprised and joyful as you can see in her adorable photo below. 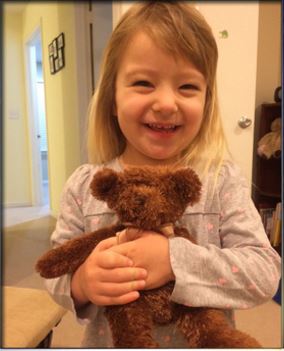 The friendliness that Officer DelDuca showed to Brennan means so much to Barrowclough as a mother. It’s a gesture that her family will keep on until the little girl grows up.

The act of kindness from this police officer won’t really make it to the headlines, but it’s enough to change the way parents introduce men and women in uniform to their children.

Instead of turning them into scary figures, officers should be treated with respect, and they will also show it in return. Who knows – your kid might also find a new friend just like little Brennan. It’s safe to say there are other officers that show care as Officer DelDuca does.

Next Article Teen Contracts HERPES From A Wrestling Match. He’s Scared It Will Spread To Other Students…