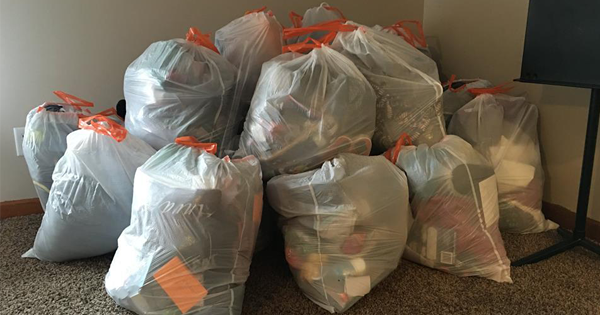 Making your children clean their rooms is harder to do than the task itself. Adolescents and teens don’t feel like spending their energy on such a simple chore. They want to engage in more exciting activities instead.

Well, for all the parents who’ve heard this before, you’ve probably gone past the boiling point. Here’s one idea from an Indiana mom that would surely discipline your kids in no time.

Alice Velásquez loves her family so much especially being a mom to her two daughters, but in any household, some things don’t really go as planned. For the nth time, Velásquez has asked and begged her daughters to clean their room. And for the nth time, the girls said they don’t want to do it.

This is another one of those gut-wrenching stand-offs in history, but this time, Velásquez didn’t let it pass. She took charge of the cleaning of both rooms, but there’s a twist in the end.

This clever mom literally cleaned the room, took all the stuff, and placed them inside 13 garbage bags. The girls can have them back if they can pay their mom $25 per bag.

She took a photo of the confiscated items inside the garbage bags and posted it on her Facebook page with this message:

“What do you do when you are DONE telling your teenage daughters to stop letting their room look like homeless people live there? You put everything (YES EVERYTHING) into plastic bags and you sell it back to them for $25 a bag (and they have to earn the money doing chores). The best part? The bags were collected as they were found in the room- random! So their $25 could buy a bag of dirty clothes, it could buy a bag of trash or it could buy their soccer gear.‪#‎MayTheOddsBeEverInYourFavor”

The post has received both praises and negative comments from social media. One user even reported Velásquez to social services. The comment wrote, “I reported you to a social worker. Your neglect towards an obvious adolescent is child abuse. Don’t share your dirty laundry on Facebook if you don’t want to face the possible prison time.”

In a more recent post, the brave disciplinarian mom said that her daughters have “bought” back all of their stuff.

Next Article Single Mom Takes Son To A Hotel. When She Sees THIS Simple Little Thing Inside Their Room, She Loses It…