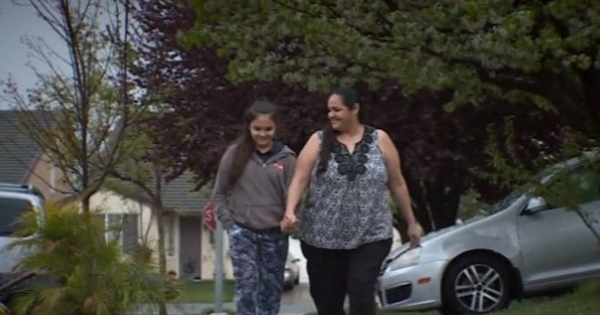 What are your chances of finding $10,000 worth of checks on the sidewalk? Slimmer than slim. Unless you’re Phyllis Gonzalez from West Sacramento, you can’t consider yourself lucky enough to stumble onto that. If you’re asking what she did with them, you would never believe what happened.

On the way to pick up her daughter from school, Gonzalez saw something on the sidewalk. She recalled the moment in an interview with local news, “I was turning right and I looked and I – they looked like checks and I was like ‘Oh, I better stop.’”

A stack of checks appeared before the mother’s eyes. They were piled up outside a Wells Fargo Bank in West Sacramento. She was stunned to realize the amount of the checks reached $10,000.

Celestine, her daughter, couldn’t help but react, “That’s a lot of money to lose.”

Since times are harder these days, a lot of people would consider themselves winning the jackpot and claim the money for themselves. But Gonzalez is different than other people. She immediately told her daughter, “‘We gotta take it back to the bank.’” And the mother-and-daughter did.

She understood what it felt like to lose something, especially this huge amount of money. “It’s awful to just lose something knowing that ‘Oh I wonder if I’m going to get it back,’ you know, just devastating.”

As if returning the money to the bank wasn’t enough, Gonzalez went to Facebook to find the owners of the lost checks. She called twice M&M Lightweight Concrete Company, the company name written on the checks. Someone from the company finally answered the following day and explained what happened.

Gonzalez said, “I was just glad to hear that she was relieved.”

After everything went back to normal, this kind-hearted mom feels proud that she has set a good example for her daughter.