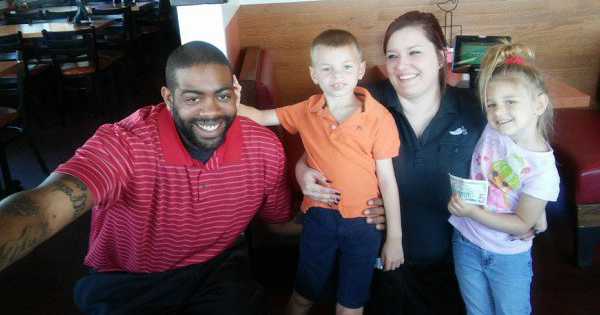 Day in and day out, busy mothers have so many things to attend to. They prepare food, go to the office, do laundry, and finish other chores. On top of these, they also take care of children. The frantic pace makes them overlook certain things, just like in this next story.

Reyna Walters, a mom from Odessa, Florida, was excited to take her son Hunter to a field trip at a Chili’s restaurant. She got her son prepared only to realize they went to a different branch. The mom felt devastated to realize what happened.

The field trip was for an independence activity for students. Walters knew it would have been a great experience for her son who has non-verbal autism. Since they arrived at a different Chili’s place and the right one was far away, she knew they wouldn’t make it on time.

Walters told one of the servers about what happened and said that it will only be her and Hunter at the table. Moments later, something unexpected happened that has brightened up their day.

“About 1/2 way through our meal the manager came up to us and said that Ashley (our server) had told him what happened and that he would be taking care of our bill today.”

The kindness of the manager has turned the otherwise bad day for Hunter and his mom.

“Right after he walked away, Ashley walked up and said that even though we wouldn’t be getting a bill, she’d still love to bring us a receipt and could lend us cash (if we didn’t have any) so that Hunter could still get the experience of paying for his meal,” Walters added.

Before Walters and her son left, the restaurant manager had one more surprise. He gave the boy an envelope full of coupons. He thought he could help him learn how to pay his meals the next time.

Previous Article Meet “Normal Ken!” He Doesn’t Have A Six-Pack, But He Makes Reality Look Cool

Next Article FREE Sample of 1 ct. PetArmor for Dogs or Cats